Irish Muslim Council Peace & Integration Council (IMPIC) and Muslim Foundation of Cork (MFC) jointly held a community Ramadan Dinner in the Blarney Street, Cork City Mosque. During the holy month of Ramadan Muslims around the world abstain from eating & drinking (including water) from dawn to dusk for one lunar month. This year in Ireland Muslims are fasting for 19 hours.

Irish Muslim Peace and Integration Council urged Muslims in Ireland to reach out other communities living in Ireland and invite them to the local mosques in order to facilitate a better understanding of Islam and the teaching of prophet Muhammad (peace be upon him). With this initiative a Community Ramadan Dinner was held in Dublin on June 26 where Tomi Reichental, a holocaust survivor was the chief guest of the event.  Likewise, The Cork Community Ramadan Dinner was attended by Bishop John Buckley, Cllr. Mick Nugent, TD Kathleen Lynch and Aaron O’Connell (Cork Simon Community) along with people from Hindu and Swedish Community on July 4, 2015.

Shaykh Ihab Ahmed, Imam of the Cork Muslim Foundation Mosque, welcomed the guests to the Mosque. Brother Kashif Jamil, Secretary of the Irish Muslim Peace & Integration Council, was the MC for the program. The event started with recitation from verses of the Holy Quran by Brother Usman. Brother Jamil then gave a presentation about the activities of the Cork Muslim Foundation.

Deputy Mayor of Cork City Council Cllr. Mick Nugent addressed the participants and said that he was delighted to be in the Mosque to share the Ramadan Iftar. He wished the Muslims a happy Ramadan.

Bishop John Bukley also wished the Muslims in Ireland a Happy Ramadan and said that such interactions between communities are essential to create better understanding of each other. He thanked the Founder of IMPIC, Shaykh Umar Al-Qadri, for his wise decision in attending the funeral of the Irish victims of the Tunisia attack.

The Founder & CEO of IMPIC and Imam of the Al-Mustafa Islamic Centre, Shaykh Dr. Umar Al-Qadri, welcomed all guests on behalf of IMPIC and spoke about the importance of Ramadan and fasting. He mentioned the issues Muslims in Ireland are facing and how the Irish Muslim Peace & Integration Council aims to address these issues. Shaykh Al-Qadri invited all to participate in the “Not in our Name” protest on Sunday 26th July in Dublin and to show that Muslims in Ireland categorically condemn terrorism. 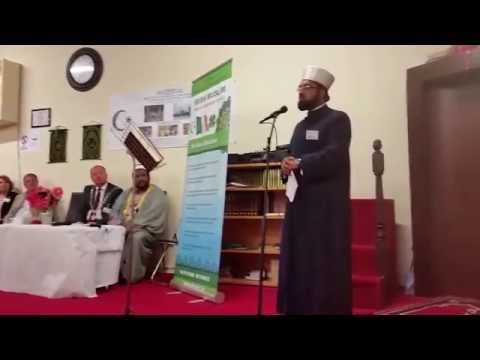